Home Magazine In residence: Open letter to a blackbird

In residence: Open letter to a blackbird 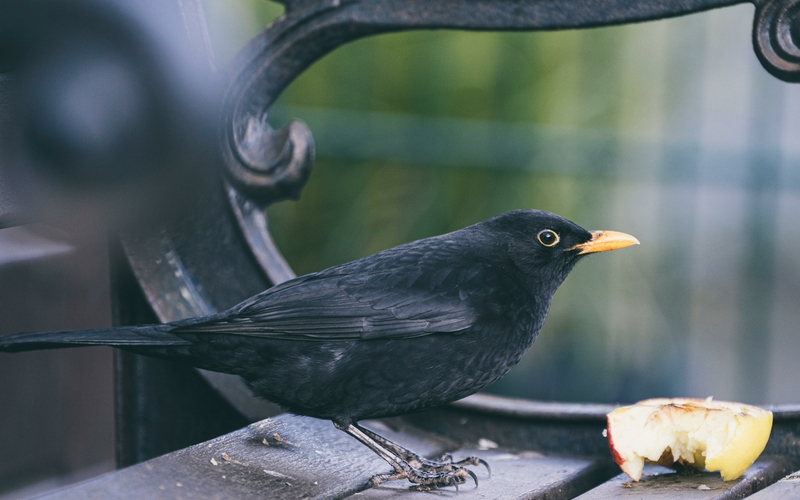 During the first two months of this year, Passa Porta’s writers’ apartment has been occupied by Quebec author Daniel Canty. He has been working on the manuscript of his next book Oiseaux civils and took part in a French-Dutch translation workshop in our series Found in Translation. Right before heading back to the Canadian winter, Daniel decided to address this open letter to an early bird in Brussels, here in the English translation by Patrick Lennon.

Blackbird, I write to you with my quill.

The apartment I’ve been lent occupies the entire second floor. I’m my own neighbour, in a sense: two doors, one of which doesn’t open, give onto the landing and the stairs that I take to go for a walk in the city, as is my habit. When I’m working at the front of the building, at the writing desk, and I hear footsteps on the stairs, a presence brushing past the locked door, I sometimes feel as if it’s my walking double who is going by. That Daniel is going to unlock the unused door, and cast a benevolent gaze on Daniel as he scribbles away. Having said that, I try to disturb myself as little as possible, and in any case, he forgot his key. Or his key is, in living memory, lost.

Oiseaux civils. Civilian birds. That’s the title I gave my manuscript, and I don’t mind telling you that I’m delighted by the coincidence. I am aware that there is another mysterious vacancy in the heart of this building and that it is yours. The bedroom window faces the living room window. They both overlook a central light well. Since you’ve made your presence heard, I’ve called it “The singing well”. It’s too narrow to see much. No matter how often I stand at my windows and inspect it from every angle, you remain hidden from my gaze. On the other hand, this well amplifies all the sounds from outside. The drumming of the rain and the whistling of the wind are intensified. Inside, it rains without raining, the wind blows without blowing, but twice as loud. And you, you sing in my ear.

Every morning, between six and seven, three trills – one whole note, one whole note, one quarter note – come up from below. They never fail to put a smile on my face. A little later, the child who lives on the first floor wakes up and calls out, “Papa! Papa!” or “Maman! Maman”’ – I can't decide. I wonder whether they can hear you too? It doesn’t sound like they can. Anyway, it’s not – it never is – just a matter of logic that connects us. You pick up your song in the late afternoon, between five and six, and then I imagine you perched at the top. Yet nothing in your tone, or its apparent source, has changed. It’s just that, for me, your song neither rises nor falls. It’s like the day. It winds up the day’s clock. Tunes up to the key of the hours …

I’m constantly asking myself questions about the reality of signs, and I like to list the answers that reach me each day in bits and pieces. Even though I understand nothing of your message, of its three insistent notes, I know that it answers for something that I would at least like to know how to recognize. Only once did I hear another bird reply to you – uuut! – with a single, almost embarrassed note. It soon fell silent. It was the last we saw of it, as they say. It seems that if you are singing alone, so early in the year, it’s because you are very young and have just left the nest (“Papa! Maman!”) to stake out your own territory.

As for me, I didn’t have to look for a way to answer you. Most afternoons I wander around town, sometimes going quite far, and it is already dark before I come home. Your memory, however, comes back to me. I’m more familiar with your dawn song than with its counterpart at dusk. A few days after I heard you, I contacted a friend who is used to drawing birds with a recording of your morning melody, to make sure of your species. At the very moment when I received his explanation by email, I looked up and saw that I was on Vogelzanglaan or Avenue du Chant d’Oiseau, the Birdsong Avenue. That’s where you were recognized as a blackbird. I couldn’t have asked for anything better. It was as if we had left a sentence unfinished at the beginning of the day and the world, in the afternoon, had finished it for us. Words – I say it over and over – know things about us that we don’t know.

My winter in Brussels is drawing to an end, I will soon return to Quebec, and someone else will take my place. I leave you on this note: merula, your Latin name, our dictionaries assure us, is, it seems, a diminutive of quasi mera, ‘almost alone’. When you hear footsteps resounding in the stairwell, tell yourself that someone like me, just as you sing, is still walking around there. And that between the spiral staircase that a walker is rushing down and the well where you are singing, the balance of days is guaranteed. It has as much to do with the substance of the invisible as it does with the substance of your message.