Page d'accueil Magazine In Residence : An Open Letter to the Covered Piano in L’Archiduc

In Residence : An Open Letter to the Covered Piano in L’Archiduc 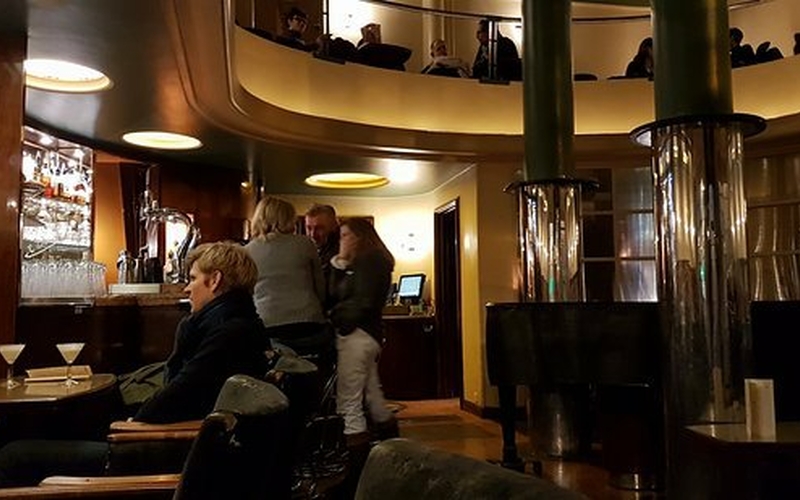 Katie Hale is an emerging poet and novelist based in rural Cumbria (UK). Her work deals with themes of boundaries and transformations, often incorporating Ovidian metamorphoses that transcend physical and ideological boundaries. Recent poems were published in Breaking the Surface (Flap Pamphlet Series, 2017) and Assembly Instructions (Southword Editions, 2019). This Summer, her debut novel My Name is Monster appeared with Canongate.

During her residency at Passa Porta in November 2019, she worked on a new poetry collection centered around the women in her lineage. She also participated in two poetry translation workshops, and sent us this open letter to a sleeping piano in the heart of Brussels.

For the first hour or so, I don’t even notice you. It’s a Saturday night, and the jazz bar is thrumming with people: perched on the banquettes, standing, dancing cheek to cheek. And because it’s November, the room’s fullness feels even bigger, with discarded woollen coats and scarves like flung inhibitions on every surface, all of us pink-cheeked in the bar’s crowded warmth.

From my seat in the corner, I have a good view of the whole room: its art deco lines and curves, the glittering chandelier, the chatter rising to the gallery upstairs. At the bar, a man with long hair and a slick beard is grinding slivers of orange peel into an inch of amber spirit, while two women squeeze between the packed bodies, delivering drinks on silver trays. A group in full 1920s regalia stands in the middle of the floor, all beads and flapper dresses, bandeaux tight against their hair. They look around for a seat and, on not finding one, shrug back into their coats and head out once again into the night. In the space they’ve left, a couple starts to dance, swinging one another wildly as the servers dodge around them.

The music tonight is a Spotify playlist. I suppose on a night as busy as this one, there’s no room for live musicians. But you’re still there, piano, dormant in the centre of the room. I first see you when the dancing couple’s friends head to the bathroom, and for a moment the crowd clears. I don’t know what I’d thought you were before. A large table, perhaps? A structural part of the building?

I was so busy looking at the people, and at the architecturally beautiful edges of the room, I’d been ignoring its centre.

You’re draped in your thick black protective cloth, which has itself become a dumping ground for discarded outerwear and handbags. Still, it’s easy to imagine you in full voice: uncovered, your lid lifted to let your harmonies flood out. It’s easy to imagine how your openness would transform the room. The first notes feeling their way between bodies, edging into conversations. The momentary hush as the air shifts around you. The way something is brought into being.

During my residency at Passa Porta, I’ve been thinking a lot about the link between inspiration and productivity, how something can be born out of nothing. I suppose this is only natural, when you’re given the precious gift of a month to work on a collection of poems. You’re going to be searching for those catalytic moments that get a poem started. And you’re also going to be pressuring yourself to produce work.

If the creative brain were some sort of machine, then inspiration would be the fuel it runs on. (Inspiration, and possibly coffee.) The inspiration goes in one end, and poems come out the other. At least, that’s the idea. Of course, the creative process is far more complex than that, and the machine far less reliable – but it’s a metaphor I’d adopted without realising it. To put it another way: fill the well with inspiration, so that when I dip my bucket into it, there’s something to draw up to the surface.

Recently, though, I’ve been rethinking this idea.

Picture yourself, piano, with your lid raised to a jaunty angle, amplifying your music into the room. The fingers press on the keys, which causes the hammers to hit the strings, which creates the sounds that the crowded room receives as music. It seems very much like a one-way process. But even when you’re not being played, when nobody is pressing you into voice, you’re not silent. Perhaps a better way to describe you would be ‘dormant’, like a sleeping volcano, lava singing deep below the surface, waiting for the right moment to erupt.

But your strings don’t just give out music; they also take it in. All the time, they’re vibrating to the hum of conversation in the room. Just as the room might resonate with the sounds of your harmonies, so you resonate with the music of the room. Even covered with your dark protective jacket, as you are on that Saturday night, with people’s coats piled on top of you, you still carry this potential for music inside you. Your very presence is a conversation between the sound and the silence; the music exists somewhere between the two. This reminds me of something that came up during the two translation workshops we ran as part of the residency. One was with students from Brussels and Ghent Universities, who translated one of my poems into a variety of languages. The other was with students from KU Leuven, translating a different poem into Dutch. In both workshops, we talked about ownership of a translated text: whether a text can exist wholly independently of its creator, citing Barthes’ Death of the Author – or whether the original writer has a place in the translation process. Perhaps there was some pressure on the students to think that the original poet should be involved, simply because I was in the room with them – but the general consensus seemed to be somewhere in the middle:

the writer of the original text is neither completely obsolete, nor are they a complete authority on the translated text; the role of the original writer exists somewhere in the in-between.

Another discussion was the extent to which a translated poem can remain ‘true’ to the original. Once translated into a new language, with its own music and cultural references, can we call it the same poem?

I’ve always believed that any poem, in its essential form, exists somewhere between the mind of the writer and the mind of the reader: between the poet’s intentions and the reader’s interpretation. With a translated text, this placing of the poem becomes more complicated, as the reader receives the poem, not directly, but through the filter of the translator’s interpretation (any translation is, after all, a form of interpretation). It’s a triangular relationship: the writer creating a poem, which is picked up by the translator, who converts it into a new music. The poem itself occurs when the reader gives it their own resonance. Taking you as a model, piano: the writer presses the keys, sending the poem’s vibrations trembling along the strings, for the translator to convert, lid raised, into sound. It only truly becomes music when it resonates within the ever-changing room of the reader’s mind.

Perhaps this metaphor is pushing things. After all, you’re just a piano, dormant for the evening, while the world carries on around you. But the potential inside your sleek casing has got into my head. It lingers there, almost always just beyond the depths of active thought. While in residence at Passa Porta, I’ve been having strange and intense dreams. This could be a by-product of being in a new city, of sleeping in a different bed, but I think it’s more than that. I think it’s because, unlike at home where it’s easy to let life and admin take over, here I’ve been able to dedicate my days to writing. Full days, one after the other, immersed in my own head. Of course, getting to do this so intensely is a privilege for any writer, but it’s also risky.

To investigate your own mind is to go into the unknown – there are always deeper levels to uncover, each one tuned to its own vibrations.

For me, inspiration seems to come from the level just beneath the one I’ve accessed, rising like a bass note out of the depths and into the very limits of hearing. It isn’t just a case of filling the well with inspiring things till it’s time to empty it again; it’s about the alchemy that occurs between that inspiration, and the furthest reaches of the unconscious mind. It’s about the resonance. And, as with you, piano, that resonance occurs both inside and outside of the mind, with the internal and the external each informing the other.

Seen in this light, the breathing in and the giving out (the inspiration and the creation) become part of the same process. It isn’t about cause and effect (inspiration + time = poem), but about symbiotic resonance between the two. It’s the ouroboros: that alchemical symbol of the snake consuming its own tail, a continuing circular process. It’s a constant putting into and giving out from your own creativity, the mind in perpetual motion.

Or, to put it another way, it’s a piano sitting dormant at the heart of a crowded bar, resonating, even in its apparent silence, with the hum of the room.