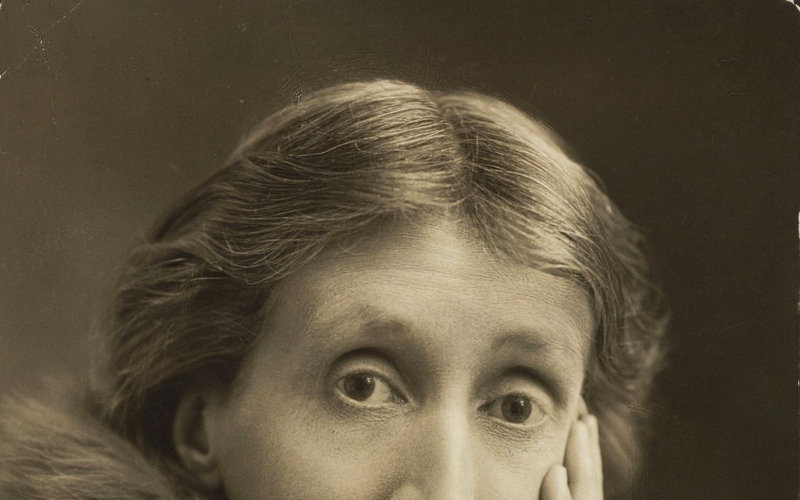 In truth, when I was asked to do this, I hesitated. Although I love Virginia Woolf, I haven’t read all of her work, so I was worried that I couldn’t offer a eulogy that did justice to the depth of her writing. I was about to politely decline when, on one of my walks, it occurred to me that it didn’t matter how much I’d read of Virginia Woolf, that her influence on me is profound, because whatever I did read of her left a lasting impact.

So I couldn't help but accept this invitation and be here, if only to show you how Virginia Woolf’s influence and appeal transcends gender, race, religion, class. And so to this black man standing before you, who lived as a boy in a refugee camp, then as a teen in Saudi Arabia before fleeing that oppressive country to arrive as an unaccompanied minor refugee in London, Virgina Woolf is an inspiration too.

Virginia Woolf came into my life via books smugglers when I lived in Jeddah, Saudi Arabia. I can’t remember which of her books it was, because being so young and relatively new to reading literary fiction, I found it difficult to understand most of the books that we came across. But the memory I have, and it was the same when reading Victor Hugo, was the power I felt in my hands. The power of words, how complex sentences, meandering scenes, varied subject matters could make up the heart of a book that was as complex as the life I was leading.

Nothing in my life then made sense, like being in the same city as my mother but yet not living together because she was a live-in servant for a Saudi princess. I supposed I didn’t read to understand, but to find the incomprehensible, the insufferable acceptable somewhere, and literature was that place.

When holding her book, each page with complex prose was like a runway for my imagination. And because those were difficult years, my fantasy helped me get through them. And it is the power of fantastical imagination, I would later learn, that also allowed Virginia Woolf to survive, and continue to thrive on paper, paper that would, long after she left our world, be handed down from one generation to the next, and pass from one continent to another.

I would meet Virginia’s spirit years later, when I came to the UK and lived on Cleveland Street near Great Portland Street. In those years, when I was learning English for speakers of other languages, and after a long day of studying, I would sit on a bench in Fitzroy Square, not knowing that behind me was the home in which Virginia Woolf had actually lived. On that bench, I wept many times when I contemplated living the rest of my life as a refugee, far away from my mother and my family and their love. But on that bench, while enveloped by Virginia’s spirit that still possesses the air of Bloomsbury, I would also dream dreams that filled my chest with hope.

Time passed. I moved on from Bloomsbury. And in 2009, I came to Brussels, carrying with me an idea for my second novel. And it was here, in this city in the heart of Brabant, that I realised some writers’ influences on me would go beyond their work. I was learning from the personal stories of great writers, like Virginia Woolf, how to write even as I was falling, how to produce an entire book even as my body was fragmenting. When I started writing my second book, Silence Is My Mother Tongue, my childhood traumas surfaced and threw me off guard. I had no idea how to deal with them.

Deeply in pain, I walked and read heavily. One of those books was Mrs Dalloway. And as I wandered in a city that seemed alien to me, people whose languages I couldn’t speak, I felt I was entering a parallel universe made up of literature, doing a version of Mrs Dalloway’s walk, walking with her elegance, waves of words lapping in a stream of consciousness inside my head, walking while carrying the doubts and fragility, of holding on to the pain in my guts, while my mind soared with creativity. That was important, that I was submitting myself to the power of imagination and the beauty of storytelling.

Writing, I was discovering, wasn’t just about accomplished sentences, but it was also about how we writers open up our bodies to give home to wounds lying beneath our skin like inactive lava. That writing was also about giving a refuge and a safe place inside us to all our characters, even those deemed unacceptable because they challenge the norms of our societies. And that a writer is perhaps someone who sees reality but also has a deep penchant for illusions. Virginia did all that, and now I had amassed the courage to see and take all of them on board too.

And so I would return to my desk fully understanding what Virginia meant when she said, “The only way I keep afloat is by working. Directly I stop working I feel that I am sinking down, down.” This realisation saved my book, and in turn, it saved me.

This is not to say that a writer has to suffer to produce, but that some of us who find ourselves, though circumstances beyond our control, in possession of painful experiences, need uplifting and literary heroes too. And Virginia’s spirited dedication to her work gave my soul the belief, just as her writing proved to be inspirational to my ink, not merely to carry on but to soar at my writing desk.

A free human being

Virginia Woolf made me less lonely in other ways too. Whenever I returned to the world of my characters who I felt were trying to dismantle the notion of tradition in the way we love, in the way we construct a family, in the way we embrace sexual diversity not only within the society but the richness of multiple sexual desires present within our own individual selves, here too, I found out that Virginia did all that. Even when she was married, she and her husband, Leonard, found a way so that free love can also have a place in their home. So much that her romantic relationship and deep friendship with fellow writer Vita Sackville-West would go on to inspire Virginia's greatest work. It’s a call to a life that’s open, experimental, full of love and honesty. Living your own truth in other words is incredibly important for a writer. How else can you allow your characters the freedom to be themselves if you are not free yourself?

I could go on and talk about how much I love Orlando, that man with the woman in him so alive, so sensuous, gloriously open and free in a gendered society, a beautiful person whose charms are Latin, African, European, Asian, the world all at one. Yes, Orlando is universal. He, she, they are all of us. One admires such a creation for whom no hard border within the self is present, instead allowing their masculine and feminine feelings to migrate freely. Orlando is an example of a free human being to me.

So I can say how profoundly happy and glad I am that Virginia Woolf and I first met through the literature smugglers brought to Jeddah, then when I sought refuge on the bench in front of the London house where she lived, and when my first novel was published by Chatto & Windus, which also owned Hogarth Press, that Virginia and Leonard founded in 1917. And my admiration for her was cemented when I needed somebody, a writer, a book or even an idea to hold my trauma-filled body and give me the wisdom to carry on to uplift my characters even as I was sinking.

Anonymous was a woman

I am an example of why Virginia Woolf’s appeal transcends all boundaries. She is an influence to so many other writers. In fact, when I came to conclude this piece by way of saying something about why she deserves the Passa Porta Noble Prize, I thought perhaps you can ignore all what I just said, because there is nothing more persuasive than to point out that she was actually one of the main reasons why some Nobel prize winners, like Gabriel García Márquez, even picked up their pens. It was Virginia Woolf who set him on his “aesthetic course” and inspired him to be a writer. Apparently Gabriel García Márquez loved Mrs. Dalloway so much that he even memorised some of its passages by heart.

Virginia Woolf wrote that “Anonymous was a woman.” Indeed, history has a habit of overlooking women and crediting men for women’s inventions, great imagination, and incredible work. I therefore wholeheartedly applaud this prize and I am delighted to be present here with you to celebrate Virginia Woolf, one of the greatest novelists and thinkers who ever lived. And on a personal note, a companion to me through her words from when I was a young boy living in the Middle East, and who I am sure will keep inspiring, and dazzling me for the rest of my life, because there is so much of her work still for all of us to read, reread, devour and admire.