Home Extra In residence: Open Letter to a Dog

In residence: Open Letter to a Dog 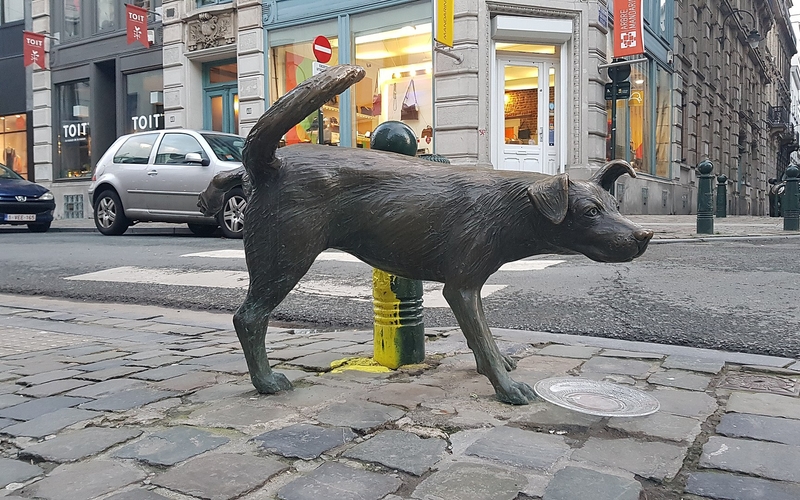 During his residence at the International House of Literature Passa Porta in October 2019, Czech author Marek Šindelka completed a whole new version of his early novel Chyba (‘The Mistake’, previously translated as Aberrant). He also took part in a French translation workshop in our series Found in Translation and talked about his novel Material Fatigue and the novella Stay With Us during a public meeting with his readers.

Back home in Prague, he sent us this open letter to a well-known Brussels phenomenon, which you can now read in the English translation by Alex Zucker.

I’ve tripped over you twice, and one of those times I crashed into a tiny old Korean man who was squatting down trying to get a picture of you with his family, while they hugged you and stood around you, striking all kinds of weird poses.

It wasn’t your fault, or theirs either. Ever since I was little I’ve been running into things. One day when I was seven, I was walking to school with my briefcase, sunken deep in thought, when I ran into a street post and got a nasty gash on my eyebrow. I was too embarrassed to cry, but I was in shock. My face was covered in blood and for a few minutes I couldn’t see. There I was, fumbling around that dirty little town square holding my arms out in front of me. The sight of me—a bleeding child, groping around in the air with his hands—must have reminded passersby of a scene from a Japanese horror film. Assuming, that is, that anyone in that tiny East European town, barely emerged from behind the Iron Curtain, even knew any Japanese horror films.

Finally, a kind man stopped to help. I’m sure it made him late for work, and it probably also caused him quite a shock, since when he brought me home to my mother, she almost slapped him in the face—as soon as she saw the blood, she assumed he must have hit me in his car.

I couldn’t help recalling that incident the first time I tripped over you, dog. I hope you’ll forgive me the digression, I don’t mean anything by it. It’s just that I’ve got this tendency toward dreaminess, crankiness, and slight autism when my mind is occupied.

At moments like these, it feels like the world is in my way. It just keeps bumping into me, getting tangled up in my feet, and then I get tangled up in its feet (and wheels).

I know you don’t have it easy. One evening I saw a tired little man with a mop and a bucket sitting on you like you were a chair, absentmindedly smoking. God only knows where he’d been that day and what kind of mess he’d had to clean up. He was obviously fed up, but still I was horrified when he put out his cigarette right on your snout. And yet I still had the feeling that you were closer to him than to the crowd flowing past you, day in, day out, for all those years, brushing against your ears, head, and back until they shone like gold. A crowd of collectors—and you, meanwhile, piling up in thousands of pictures out there in the digital universe, in unknown feeds and posts, stored on unknown servers.

Yet even you are alone in the end. They cast you out of bronze, or whatever, installed you on the sidewalk by a crossing for pedestrians, and now there you stand, in that humiliating pose, like your more famous relative, that poor little pissing boy—what is it with this city and urination, anyway?—like a dummy to keep the crowd entertained.

But back to my autism. A terrible thing happened to me that I’m ashamed of. Originally, I was going to keep it a secret from you, but over the course of the month that I’ve been working in Brussels, I’ve only managed to peel myself away from my computer when absolutely necessary, and have found myself going out at the most unlikely hours, day and night, in a total daze. And so one day, there I was, lost in thought, disgruntled about some problem in my text that I couldn’t figure out for the life of me, and as I hurried back to my keyboard, something got tangled up in my feet again. There was a strange jingle and rattling, and suddenly I realized: I had kicked over one of those paper cups that sit in front of those beings the city is overgrown with, invisible amid the rush, huddled on pieces of cardboard and foam mattresses, begging for change. As the coins went flying across the pavement, the old Romanian woman whose cup it was screamed at me unintelligibly.

The terrible thing about it was the first feeling I felt was anger. There I was, all in a hurry to solve my stupid problem, and I was so blinded by that that I was overwhelmed by my feelings:

In an irritated tone of voice I apologized, and as the woman’s screams escalated, for a split second I had the urge to just keep walking. I even took a step away! I managed to pull myself together before I took another step, but by then it was too late. I picked up the coins and apologized, but too late. Every time I passed the woman after that, I would try to pay my way out of my guilt by tossing more into her cup than I ever gave anyone else on the street, but it was no use. The feeling of shame was still alive. Alive and growing.

I write about the world and its problems. I’ve always thought, and declared out loud, that people should fight for the weak, for the invisible and overlooked. And then I discovered that in fact I didn’t see the world. And I didn’t want to. Even with the “outcasts of the world” at my feet, literally tripping over them, I didn’t see them, and not only that, but I was angry that they had the nerve to get in my way when I was in a rush to get back to my office and write about global injustice and God knows what else.

Scottish anthropologist James Frazer, author of many famous works on the life and mythology of what were formerly known as “primitive” peoples, was once asked if he had ever lived among the natives he studied. Reportedly, his only reply was, “God forbid.” I used to see this as amusing evidence of the hypocrisy of early twentieth-century science. But then I realized that in fact I was worse. At least Frazer was honest.

Ever since I was little I’ve had a painfully vivid imagination, and, under certain circumstances, an almost unbearable compassion for others. Which is probably why I write books. But anyone who writes books is also an unbearable egomaniac. A constructor of stories and calculator of emotions, infatuated with his own work. An ambitious, self-centered, antisocial monster. I think this may hold for the other arts as well.

There’s still one more thing I wanted to write to you. Coming home from one of my nighttime walks, I saw something bizarre: an actual, live dog pissing on you, a bronze pissing dog. When the dog was done, he went running off after his master, who was sauntering down the sidewalk a short way ahead. Like every other poet and writer with a twisted imagination, I wondered if maybe that dog was your soul set free to roam the city streets by night. But then suddenly I sensed somebody watching me, somebody looking. It was a girl—a woman—only slightly older than me, who sat out by you every evening, on a piece of luggage the same brand as mine. She was too proud to beg, and refused all money offered. The woman was well dressed, and every night, after eleven, she would zip open the suitcase, lie down in it, and go to sleep, covered in a black quilted down coat. She looked me up and down in a way that made her contempt for me clear. Her look was so piercing, I shuddered and hung my head in shame. Did she have any idea of the nonsense going through my head? That I was just poking around those autumn-blown streets with no real goal in mind? That in fact I knew nothing at all about life? Or did she just despise everyone?

I hurried away, feeling her eyes burning into the back of my neck. I knew she was right—whatever reason she had to despise the world, she was right.

That was the second time I tripped over you, dog. I was in such a hurry to get away from that terrible gaze that I slammed into your tail with my knee. I can still feel the bruise as I write this.

I don’t really know why I’m writing to you. Maybe because I lack the courage to confide in another human. And also, obviously, I know you won’t write back. How could you? You’re a dog, and a bronze one at that. The ideal audience for any writer. Still, on the off chance that you aren’t just a dummy, just a cheap lure for millions of tourists, on the off chance you do sometimes go running through this cold, wet city after dark, be sure to look out for all the people who sleep in its streets, on foam mattresses, in boxes, and in suitcases.