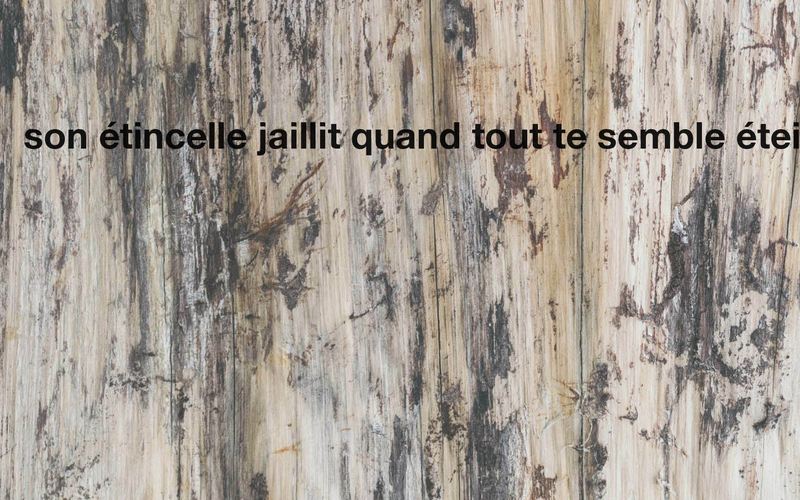 In these troubled times, we asked a number of authors we admire what ‘courage’ means to them. In the coming weeks, you can read their answers here, in the form of a poem, a memory, an anecdote or a more philosophical reflection.

First he laid low in your ruts, devoid of anger and with no clear origin nor respite, when nothing fit in the cracks. Since the inky night that swallowed your mouth, he has meandered. Outside the straps of your furnace, he still presses on along his small path until dawn. Extending towards the north, the horizon, he prepares his cry.

Between the knots of your frame, your load, with its muscular seracs and crags, he finds an unprecedented plot of land from before the winter, drives out the fire, ruffles it with his breath, reassures you. He pulls himself down from the attics of your body with its red cogs, extracting himself from your gears. A primordial force suddenly rises up, its impulse felt even from under the frost.

Here he is, reborn as a bird. Let him uncoil and extend his lacemaker hands which he uses to briefly light up your tissue. He stretches out his neck, shakes off the dew, folds new and freshly turned grass. He hatches thus: a flight for the skin which attacks each day. The caress of rain, light and covered in water, pouring with breaks of sun. His nipple raises you up.

And suddenly it’s take-off, with the momentum to fly to the peaks and sow the winds, to weave your wings, to stride around in the city, to glide whole. Here you are, carried off. You begin to dress in his shine, you knead your inner tree. You prepare your return with your wingspan and bend yourself upright: bow, conifer, woman, citizen, brother.

His spark surfaces when you think everything has long been extinguished. In the line of flight to the daily beat, you are no longer at bay. And so, since he acts so familiarly with you, you finally give him a name: courage.

Translated from the French by Daniella Shreir

Catherine Barsics (1983) is a Belgian poet and performer who was born in Liège. She is often involved in artistic projects that seek connections between poetry, visual arts, dance and science. In 2019 she published Disparue, a "poetic investigation" of a true fait divers (éds. L’Arbre à paroles).

Perhaps you were moved or outraged, challenged or inspired. The online magazine allows us to introduce you to texts you might not expect. It also allows us to commission authors and translators and to pay them a decent fee for their work.

We make sure familiar voices get heard, but we also actively search for writers who are exploring unfamiliar territory or telling stories that get less attention. We find it important to give a platform to a wide range of literary makers, to shoulder them where necessary in the writing process and to pay them properly. Because we believe that all good and innovative voices need to be heard. You can help us to achieve this balance by supporting us financially. Your support goes straight to writers and translators.

Whether big or small, each contribution helps us to make sure that the authors get heard.

Many thanks in advance!