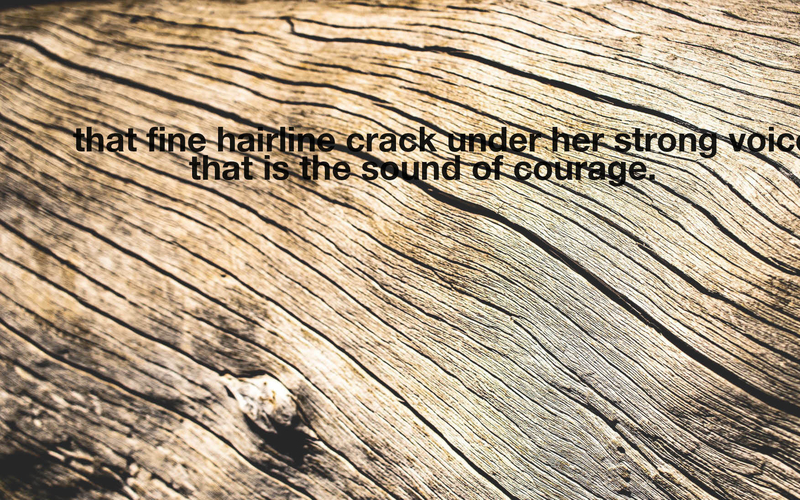 In these troubled times, we asked a number of authors we admire what ‘courage’ means to them. In the coming weeks, you can read their answers here, in the form of a poem, a memory, an anecdote or a more philosophical reflection.

It is a Saturday evening in October 2020. A young woman stands in the middle of a crowd of protesters. A few days later, she is on Instagram Live with a top journalist to talk about a missing man, Chijoke. Her voice is steady or seems to be. Underneath that steadiness, if you listen well, is a crack. A hairline crack like one might find on fine china. Her name is Blessing. Chijoke is her older brother.

There is a selfie on the internet of Chijoke. In the picture, he looks like a child on the cusp of teenagehood. He’s wearing blue shoes to match his t-shirt. There is a childlike quality to his smile, shy and tight-lipped. Perhaps he’s not as young as I think at first, I’ve never been good at telling people’s age beyond broad categorizations: Toddler. Teenager. Adult. Aged. The photograph is not date stamped. It might have been a picture from just before he disappeared, in which case he is 20 in it.

Blessing is testifying to her brother’s life. A wonderful brother. She is testifying against the Nigerian government. A cannibalistic one which eats its own. Chijoke was illegally detained by SARS, a police unit of the Nigerian government who have mostly operated with wanton impunity, against whom the protest is being organized. Between January 2017 and May 2020 alone, Amnesty International documented at least 82 cases of torture, ill-treatment and extra-judicial killings by this rogue unit. Having a tattoo, looking like an armed robber, dressing like a prostitute, driving a car that looks like it’s beyond your means is enough to have them haul you into detention and hold you until they get as much money as they can from you. Chijoke was arrested on his way from a party. Blessing has been chasing (for) justice for him.

Chijoke was killed by the men who held him. Perhaps, the officer in charge, James Nwafor, was frustrated that he could not get any money off him. Or more off his family. Perhaps, his patience ran out. Chijoke’s father was asked to swim through a river of bloated bodies to look for his son.

Blessing knows that it would be so easy for her to be disappeared like her brother. To be killed for daring. Yet, she opens her mouth and she lets out the words that must be said to grab that justice, slippery as wet soap.

That fine hairline crack under her strong voice, that is the sound of courage.

Chika Unigwe (1974) is a Nigerian-born Igbo author who writes in English and Dutch. Previously based in Belgium, she now lives in the United States. Recent titles are Night Dancer, Black Messiah, and Better Never than Late.

Perhaps you were moved or outraged, challenged or inspired. The online magazine allows us to introduce you to texts you might not expect. It also allows us to commission authors and translators and to pay them a decent fee for their work.

We make sure familiar voices get heard, but we also actively search for writers who are exploring unfamiliar territory or telling stories that get less attention. We find it important to give a platform to a wide range of literary makers, to shoulder them where necessary in the writing process and to pay them properly. Because we believe that all good and innovative voices need to be heard. You can help us to achieve this balance by supporting us financially. Your support goes straight to writers and translators.

Whether big or small, each contribution helps us to make sure that the authors get heard.

Many thanks in advance!